The sky is falling. The leading cause of death in NYC is having a crane fall on you. Not really, but it's starting to seem that way. Two of these big-ass cranes have collapsed within a two month period. Not too long before that, another crane dropped it's load onto a Midtown street with people diving under cars and one of the construction supervisors getting crushed as he sat in an office-trailer that took the brunt of the hit.

And it's not only in NYC that this is going on.

Last Tuesday, I was driving down E. 44th Street. A flagman stopped me so a crane could pick up a load off of a flatbed trailer in the middle of the street. The truck drove out from under its load and I watched a few dozen tons of steel start to rise over the street. As soon as the truck pulled away and the steel started to rise, the flagman waived me through and the cars behind me started to honk their horns.

Are you out of your fucking minds? Sorry, I sat there and waited until the steel was all the way up and swung in over the 35 story building they're putting up. At least in that case, I could kind-of count on any catastrophe to fall straight down. When the big cranes go, they tend to fall a bit sideways, so you don't know where it's safe to be standing other than really far away.

After one of the cranes collapsed here, an inspector was arrested for falsifying his reports to indicate that he'd inspected cranes in spite of the fact that he didn't really even come to work on those days. Another guy was arrested last week for taking bribes to sign off on projects without ever visiting them.

Look at some of these suckers! 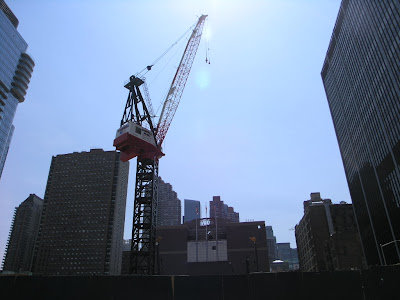 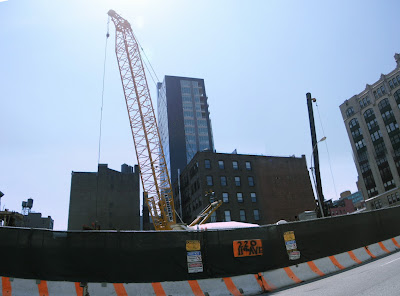 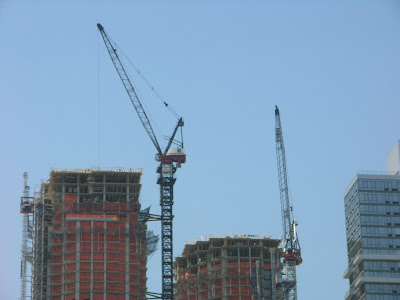 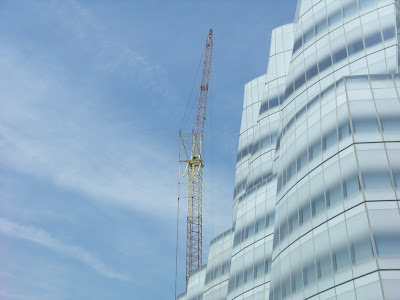 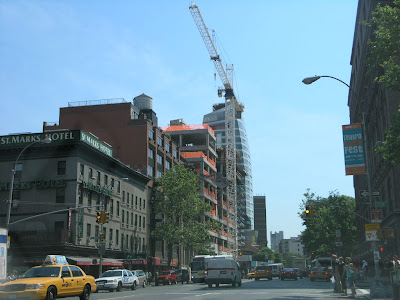 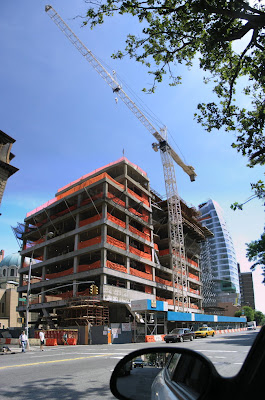 This one's got huge steel plates rigged as counterweights. A few days ago when I was driving into the city, the counterweight end of it was swung out over the street. I'm sure they're securely fixed to the crane so that they'd never fall on anyone driving underneath and then unbalance the crane and make it snap like a twig and fall in the other direction and kill a bunch of other poor folks who made the mistake of walking down a street. Yeah, I'm totally sure of that. 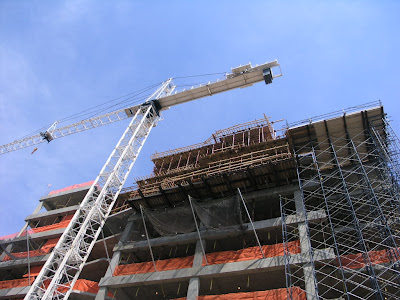 I realize I'm supposed to have some deep final point...some insight that makes it worth me typing this and you reading it. Sorry. These things are scaring the crap out of me and I'm going to start altering my routes to avoid them. That's all I've got.

And since that bridge went down in Minneapolis, bridges have me a little jittery.

I think I'll stick to flying. At least we know TSA is keeping that safe by preventing those dangerous Air Marshals from boarding flights.

My Dad (who is in safety management) said the problem with the cranes is they only need inspected once a year--NOT every time they're put together at a site.

And since cranes are dissembled and reassembled...

Not that we have cranes like that here in West (by God) Virginia.

In NYC, they have to be inspected a bunch of times. When they're first installed, and then each time they're "jumped", (i.e. when they install another section to make it taller).

It still doesn't make it any better, especially if the inspector is signing off from a golf course.

Oooh, cranes! The crane for my building managed to be installed, "jumped" 3 or 4 times, and be disassembled and removed without falling on anyone. For which I am profoundly grateful.

When I went to Vegas for the first time, I and another of the gals took pictures of the dozen or so cranes working on the giant project they have going on in the middle of town. It was very impressive!

I'm with ya, Nathan. Even though I've spent most of my life amongst giant machines, I still find tower cranes to be bizarrely unnatural.

I've also seen enough accidents on Navy piers and beneath lift cranes that the thought of people driving or walking below a hoist seems utterly insane to me. There is nowhere I need to be that is important enough for me to risk getting squashed like the little dog in A fish called Wanda. No fucking way.

Nathan, you must not be the only one noticing the rash of crane failures. The Washington Post just posted an article about it in their science section.

Anne, I linked a Google search that shows hits for "crane collapse" all over the country. The story you linked is one of the first ones.

In the article, I found it interesting that one guy says, "the cranes are safe...human error is the problem." Great! Let's remove humans from the process and it'll be totally foolproof. Duh!

Well, it's the first one NOW because it finds the most recent articles. It wasn't there before.

I knew about that article before the writer did. That's my story and I'm sticking to it.