Blogging From The Pits of Doom.

Just two weeks ago a told you how Teufel had come down with a case of ringworm (really misnamed because it's a fungus). I told you how the treatment is a dip that leaves the kitty smelling horribly sulfurous. So, two days ago, I noticed a little spot of the stuff on LuLu's nose.

So, we've just returned from a visit to the vet to have them both dipped. If you're like me, you'd think that twice the kitties = twice the stink. Well, you, like me, would be wrong. The stink increases geometrically. Yes, these cats stink at least four times as much as only one stinky kitty.

And, the vet says that when it's all clear up they should get all their fur back and no longer resemble this thing. 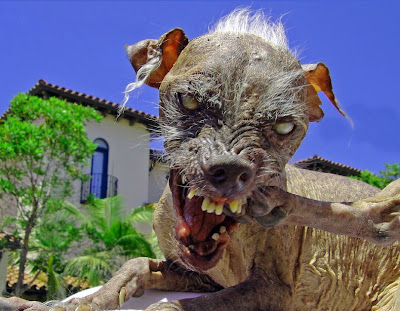 LuLu and Teufel are not posing for photos for the moment. Please respect their privacy in this trying time.
Posted by Nathan at 1:56 PM

Ahh! The joys of cat caretakership.

The good news is that they've easily doubled in size since we got them and each has gained almost a full pound in the last two weeks.

Come on, you know we need pictures so we can all say, "that's not THAT bad! I've seen worse! In fact my pet giraffe once had mange so bad it totally lost it's spots and was arrested for imposing as a deformed lama."

Careful with those fingers Michelle.