I Loathe Approximately 2.6 Million Of You! Yeah! You Know Who You Are! 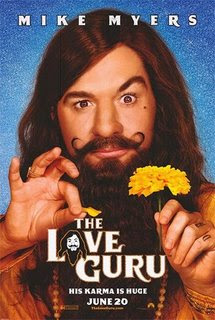 The good news is that The Love Guru has grossed only $18.6 million dollars so far. It's getting its ass kicked by pretty much everything out there. The bad news is that its grossed $18.6 million dollars so far. That means that approximately 2.6 million of you have paid to see Mike Myers not be funny again. That means there are 2.6 million enabling asshats out there. When you spend your money on a Mike Myers movie, you are telling the studios that there should be more of them...and that's just not true.

I forgive the Austin Powers movies. I hated the one I saw and thought the character was just irredeemably creepy, but hey, it was somewhat original and I can see where some people might have thought they were funny. Guess what? Even Mike Myers knows this thing is a stinking steaming pile of shit. Guess what the only thing is that he has to say when he's out plugging the thing? He steeples his hands and gives the fake blessing "Mariska Hargitay". Yeah, that was almost funny once. Shut Up!

If any UCFers shelled out to see this thing, please don't tell me. I'm not sure I'd respect you in the morning.
Posted by Nathan at 8:07 PM

No worries. I would have to be paid LOTS to go see the movie. Next up on my list of things to see with the spouse are Hulk, Get Smart, and maybe Narnia. I have a friend that we keep trying to hook up and go see Sex and The City, but we might wait and watch it out at the Blue Loon, where we can swill down booze and have fun mocking the film.

Is this a movie or something?

It opened in wide release on Friday. It should make it to West Virginia in another few weeks.

Actually, the last movie I saw in the theater may have been last years Fantastic Four movie.

I know I missed a bunch of good stuff, we just end up being so freaking busy on the weekends...

I enjoyed and owned the first two Austin Powers movies. Goldmember sucked. I have not seen, and have no desire to see, The Love Guru.

I liked the first Shrek, the best part about the second one was the take-off on American Idol, and the little bit I saw of the third one didn't make me want to see the lot of it I missed.

I rarely see movies in a movie theater, mostly because there aren't that many movies in a year I have any interest in. I do hope to see three movies, though - WALL-E, Iron Man, and The Dark Knight.

In the mean time, I collect classic movies on DVD. Right now I'm working on all the great Humphrey Bogart movies. I have Casablanca, The African Queen, The Maltese Falcon, and The Treasure of the Sierra Madre.

I actually don't go see all that many movies in a theater. I don't know why, I just don't bother that often. We do Netflix big time.

And I don't own a whole lot of DVD's because there really aren't very many movies I want to watch over and over again.

I'll probably see Hancock when it opens because it looks pretty funny and I like Will Smith usually. (If I'd known he was going to turn out to be a huge star, I'd have made a point of befriending him on the few days he worked on Made in America. Maybe he'd be a UCFer now and Janiece would have to give me a line on the chart for when he sent me that Porsche.)

I pretty much don't watch movies at all. Theaters are way expensive, and there are always more interesting things to do at home.

We're watching "Con-Air" this weekend. AGAIN!
You can never see that movie too many times.

GF - the Skynyrd scene is a classic.

So Nathan - did YOU see this movie? Methinks thou dost protest too much.

I saw Ace Ventura II once. Jim Carrey owes me two hours of my life back.

Having children means not getting to see too many movies in the theater, so we have to save those times for the things we really want to see. The Love Guru would never be one of those times.

I was a projectionist for 5 years and saw WAYYY too many disgusting things happen in movie theaters. Aside from that, this movie looks stupid, despite his reunion with Mini Me.

Nathan, I knew I liked you, but your opinion that Mike Meyer just ain't funny clinches it.

Frankly I thought I was the only one. Shrek, yeah, funny. The sequels, ho hum, but OK. His cameo in Mystery, Alaska was not too bad. Other than that though, crap crap crapp. The guy just isn't funny and he's gone on way too long.

Another overrated idiot, Adam Sandler. Seriously, how many fart and piss jokes can you tell before people start to realize that that's really the limit of your talent?

Con Air? You know that's one of those formula movies you expect to be bad, and it turns out to be a blast. Personally my favorite scene is the corvette on a string behind the airplane bit. Well, that and Steve Bushemi.

Tonight, it's going to be my favorite movie of all time - The Thirteenth Warrior.

I dunno, Michelle, the floor? The seats? The prices?

The sex that's not occurring on the screen?

But does that qualify as disgusting or expected?

I'm not sure that I've seen a Mike Myers movie since Wayne's World in college. Only saw parts of Shrek.

"The sex that's not occurring on the screen?"

You hit the nail on the head Vince, that's one of a few things that make me never want to set foot in a movie theater again. In a projections booth you have a birds eyes view of things that are happening down there, and it's not always pretty...

But does that make movie theaters any worse than hotel rooms?

I mean, they don't wash the bedspreads that often, so chances are some really horrific people had sex on that bedspread, and you're now lying there watching TV, maybe dressed only in your underwear.

As I said, I expect disgusting in a theater, and so dress accordingly. Just doesn't seem any more gross than many other things out there.

In his early years, I think that Meyer had potential. but all of that is gone now. I don't tend to watch comedy. I just don't find it funny. As for Shrek..i think i am one of the last on the planet to have not seen any of them. Not a one. My children have, thanks to kind aunts, who know i CANNOT watch any movie with Eddie Murphy in it. Even just his voice.
Nope i will not be seeing the Love Guru.

"But does that make movie theaters any worse than hotel rooms?"

Michelle, I also do my best to stay away from hotel rooms! :)

Yeah, not living out of hotel rooms is one of the better benefits of being no longer in government service and not having to travel 3 weeks out of the month anymore.

And personally, I prefer to watch movies on my big honking plasma screen, in HD and and surround sound. Sitting on my couch and being able to pause it when i've got to go take a leak. I hate theaters, and theater going crowds of idiots chomping on pork rinds and slurping giant drinks while talking on their cell phones.

However, I did see the last Indiana Jones movie in the theater, early showing before most people are awake, and it rocked. Can't wait for the DVD. Harrison Ford? Yeah, OK, but seriously Cate Blanchet? Her I'll brave the theater for, any damn day of the week.

Adam Sandler is a victim of most of the roles he's chosen. If you see him in something like Fifty First Dates or Spanglish you'll see a more appealing side to him.

And sorry, I may be a moron, but I just never got Blade Runner. I know the director had a "dark" vision, but, WTF? I couldn't see what the hell was happening half the time. Meh.

I will not enter the "theater seat"/"hotel comforter" debate

Hey, let's talk about Porta-John's in August at an oversold festival!