The Return of Multi-Post Saturday!

IMDB.com is mostly a good thing. The discussion threads are among the most lame things on the internet (behind the LOL-speak comments on ICANHASCHEEZBURGER, but lame nonetheless). Otherwise, it's actually a really useful and amazingly comprehensive site. I've updated my own listing, a couple of times, but more often than not, they know I'm working on something before I've been officially hired. It gives me credit for working on Jim Jarmusch's Night on Earth. Folks, I worked exactly one day on that movie. I had to look it up when I saw it on my listing because I had absolutely no memory of being involved. IMDB knows (practically) all. It's impressive. (Once, I was briefly detained by a machine-gun toting guard for taking pictures of the Federal Courthouse in Foley Square and then released because the guy on the other end of the walkie-talkies checked my IMDB listing and decided I was legit.)

On the other hand, there are things from early in my career that they've completely missed. They don't mention any of the times I worked on The Equalizer. There's nothing about me being a P.A. on the 1986 TV remake of The Saint. Actually, I can't find a listing for that show at all, so maybe it never aired. I also have a vague memory that in the early 90's, they were doing one of those Movie of the Week things where Columbo, Kojak, and (I'm blanking here...Which was the show with the Texas Ranger playing a fish out of water working with the NYPD? It starts with an "M", I think.), some show I can't remember, aired 1-1/2 hour episodes on a rotating weekly basis. Anyway, I worked on one episode of the temporarily revived Kojak. Where's my IMDB love for that?

Anyway, forget about the stuff they missed. My IMDB page lists 37 movies and TV shows I've worked on. Last night, I scanned through it and came to a realization. Of the 37 projects listed, I've never seen 19 of them! For anyone doing the math, that's slightly more than half.

For the third time, I'm gonna refer you guys to SubTropicalGal's new blog. She and her husband are friends in real life and I'm doing my best to suck her into UCFerness.

Anyway, a couple of days ago, she Jackson Pollacked her front porch and in the post showing the results, she included a link that we all (apparently), thought was going to take us to some boring art history page. Here, she chastises us for missing out on a cool link by making assumptions. I suggest you follow her link to discover your own inner-Jackson. It's actually a very fun link. (Hint: Your first reaction may be "Why the fuck am I looking at a blank page?" Move your cursor around a little and click your mouse and you'll get it.)

Hey! Did I tell you I'd be back with more or didn't I? I think I did. Mere minutes after posting, here I am adding crap to today's post. You're welcome.

Not that any of you are going to be terribly effected by this, but I thought I'd let you know.

NYC is full of neighborhoods where the neighborhoods are fairly well-known. Think of Soho and Tribeca in Manhattan. Brooklyn has Flatbush, and Coney Island. This is totally fine and useful. However, I made a discovery last week. Mapquest recognizes NY for Manhattan and Brooklyn, and Bronx for actual locations. If you want to find a location in Queens, though, you need to know the neighborhood.

Plug in Flushing or Astoria or Rego Park, and you'll get a nifty little map of what you're looking for. Plug in Queens, NY and you get nothing. Mapquest never heard of it!

I'm sorry....are you still here? Were you looking for some point to this little blatheration? Did you not see the title...Inanity the Third? It's just crap off the top of my head. No deeper point involved.

And the Inanities just keep on coming:

If you click on the Charlotte Misner link at the top of the sidebar, you'll see the beginning of the character discussion we started a few days ago. I'll be doing a little bit of an edit/rewrite of Chapter One today to follow up on some things that were decided in the comments there.

It shouldn't have too much effect on what's already been written in Chapters Two and Three, but I suggest Kate and Jeri take a look later today to see if they need to adjust anything. I don't know if the site will let me post the changes in color or anything, but I'll try to find a way to make any changes really obvious and easy to find.

I know I've mentioned that Teufel is being attacked by a pernicious fungus and that he's not at his...most beauteous right now. I've posted some pictures, but they really don't do justice to awfulness that's happening to his poor little face. It's been tugging at the back of my mind that he looks just like someone I've seen before...and then realization broke through. 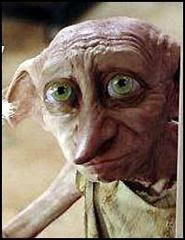 A Bloody Mary with your everything bagel on a Saturday morning is a good thing.

It has been decided that the butt-cheek dent is just fine here at home and needs to be distributed to a nearby movie palace. When GF gets back from running a couple of errands, we'll be going to see Indiana Jones and the Temple of the lost Crystal Orbs of Narnia with magic whips and pistols and no more Nazis and beautiful foreign locales even though he's old and no one believes he can really outrun an infant much less the hordes of bad guys who have motorized transport. (Or something like that.)

Over long, overwrought, over impressed with itself. It wasn't bad, but every one of the chase scenes was way to long. Every time they discovered something, the camera lingered too long on all the Gee Whiz crap they'd built.

Last paragraph redacted for reasons of my very own.
Posted by Nathan at 8:00 AM

Guess I am the first one up to read the insanity. Or rather, the one who has just got home from work...
Weird that Mapquest could not find Queens....I should take a look and see how it fares out in our area...

I made my changes right after we had the discussion. Cause I'm on top of things that way. ;)

I like your inanities. Except I read them as insanities until about the fourth one. No accounting for perceptions, or lack of glasses first thing in the morning, eh?

Mapquest looks like ass. I stick with Google Maps for the aesthetics. But, out of curiosity, do you find Mapquest more accurate, NG?
----------------------
Maybe you need to give Mapquest more information in your search, thusly: Queens, from Brooklyn -- north til you smell it, east til you step in it. AAAAHHHaaaahahahah...
----------------------
The vast majority of comment threads are tedious and lame. "Ain't It Cool News"'s are even lamer than IMDB's. I like to read political blogs, but their threads fall especially quickly into asshattery. The problem is, obviously, the anonymity of these interwebz. I sign my full, real name (most of the time) on purpose, specifically not to give in to any temptation to contribute to the steamy pile of "wisdom" online (I have, indeed, been tempted). On rare occasions I will use a handle if whatever I want to say involves a friend or family member who I know would be embarrassed by my sharing under my name.

Here's a topic for you, NG: The dream of compulsory full identification online; a fantasy of civil discourse.

I go back and forth between mapquest and Googlemaps, but I only use them for myself. I'm responsible for maps and directions on call sheets and I'd fire any assistant of mine who tried to pass off a set of internet directions.

As to the aesthetics, I generally like Googlemaps better, but sometimes they don't print well...especially in black and white. For NYC, sometimes I use oasisnyc.net (which is also how I find out who owns properties I'm interested in).

I only use my first name when posting, but it links to this site and IMDB and the book, so I'm sure as hell not hiding behind anything.

Speaking of inanities and wildly entertaining websites that don't seem like they would be at first glance:

Wait a few seconds after it finishes loading... :D

Nathan, I took a screen shot of the Pollack page, and then just photshoped out what i didn't need. I tried saving the page first and also ended up with a blank page.

OMG, MWT, that's brilliant! I'm going to post it on my blog now, or maybe just send it to a few friends (or both).

Thanks for the inanities, Nathan. I love imdb for technical info (the guy verifying who you are by looking on imdb is hilarious) but I agree with you on the idiotic comment posts. I was actually relieved when they changed the comment threads to "subscriber only" because as a non-subscriber it removed any rubbernecking temptation from my path. I don't need to waste a moment on such garbage. Inanities are one thing, imdb comment threads are inane x 10.