I'm Making A List...And There's No Need To Check It.

Let's take a little trip down memory lane. Back in May, we brought home two new kittens. As you'll recall, we knew Lulu's name was LuLu because we'd gone to the shelter specifically looking for a LuLu. LuLu just oozed LuLu-ness. The shelter thought the little yellow kitty was Marvin (if I remember correctly). Uh, No.

For almost a week, the poor little yellow kitty had no name. 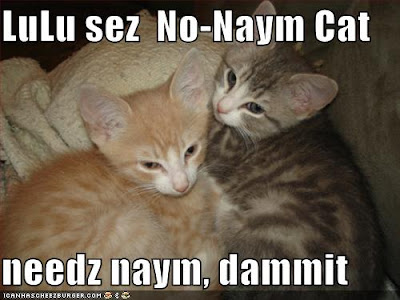 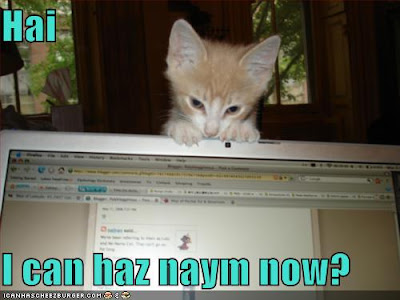 And then I settled on Teufel as a name. (It's German for Devil). 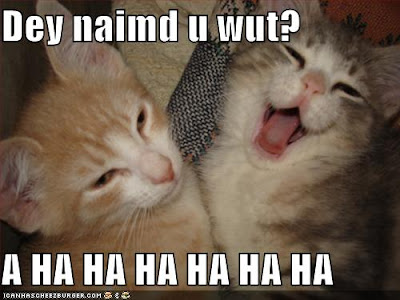 Here they are showing an early affinity for sliding around in the tub. 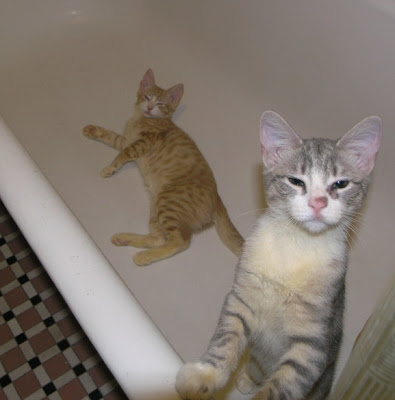 And Lulu likes the sink too. 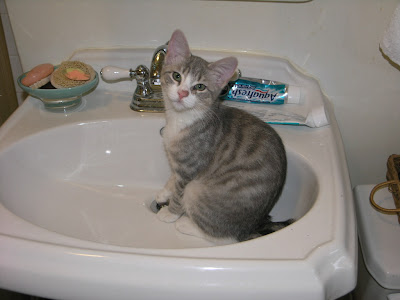 Here's when I should have known we might be in trouble. What you can't see in this picture is that Teufel had just closed Firefox. To this day, I don't know what he was searching. He even managed to clear my history before I could get a look. 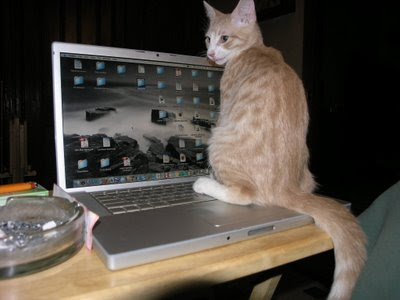 So, here's the thing. LuLu is a little angel, or at least she would have us believe that. It's entirely possible that she's just the cat who doesn't get caught. I do know that when LuLu is doing something and you holler "No" or "Down", she usually does it.

Teufel, on the other hand really is a devil. Yell "No" or "Down" at him and he only does whatever he was doing faster in hopes of achieving his evil goal before you can pull him out of whatever he's gotten into.

Here are some of Teufel's achievements. 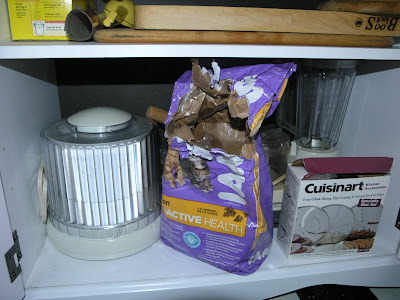 -We keep Widget's "Fat Cat on a diet" food in a plastic bin with a snap on lid...think giant tuperware. Teufel can open that too.
-Teufel has discovered that we keep twist-ties and rubber bands in a little basket on a shelf over the kitchen sink. Teufel likes twist-ties and goes up there to get one every morning right around 10:00 a.m.
-And Teufel likes water. If you don't put down the lid on the toilet, Teufel will make an appearance at some point with wet paws.
-LuLu still likes playing in the tub, but only when it's dry. Teufel jumps in and starts rolling around the instant I step out of the shower...and then runs to jump on the bed because he likes the look of his little wet pawprints.
-He likes to see if he can climb a towel faster than it will slide off the towel bar.
-He likes climbing the shower curtain because...I have no idea. Maybe the world looks better from up there? Maybe he thinks we wanted little holes in it? Whatever. He looks awfully proud of himself when he does it.

And whenever Teufel conquers some new level of "things we'd be just as happy if he hadn't figured it out", LuLu is always there looking on...looking innocent...looking like she's thinking "Can I have all of his Christmas presents, Can I?"

In the comments, it has been intimated that I have brought this behavior upon myself by choosing the name Teufel. Carol Elaine, however, wisely reminds us of the dire consequences you might all have suffered had I retained the name Marvin. You're welcome.

It's all because of your naming choice, it was a self-fulfilling prophecy. If you'd gone with Engel or Himmel you'd have had an entirely different cat and Lulu would have been the bad cat, by comparison.

But you chose to name him devil, this you get a demon kitty.

Didn't you know how this works?

Can we get a video of towel climbing? Defying gravity is always enjoyable to see.

I will attempt (sometime) to get video of towel climbing, but really, it's almost too fast for the human eye to follow.

The mental image of Teufel curled up in the cat food bag made me laugh really loud.

Teufel is reminding me of some friends' orange-and-white tabby, Keiko. Everyone has been glad that Keiko (a) has been spayed and (b) has no thumbs. It's really the same thing--we're glad she's been spayed because one of Keiko's eventual descendants might have gained thumbs through some hereditable mutation, and then it would pretty much be a matter of counting down humanity's last days.

I wonder if it's something about orange cats?

He didn't curl up. His ass end was sticking out in that stretch that cats do and he had apparently eaten enough a passed out.

It was pretty funny regardless of the position.

Instead he'd be trying to vaporize the earth. I think I like the "things we'd be just as happy if he hadn't figured it out" better.

But yeah, naming a cat Teufel was just asking for trouble.

A good reminder of the danger "Marvin" can lead to. But a name that defined gentleness, good behavior, and lack of curiosity would have led to a massively boring cat. And if you want boredom in a pet, then a goldfish would better serve you and be cheaper.