Some Random Stuff for a Sunday.

First off, I told you a while back about my history with the D.G.A. and that I was rejoining for the job I just finished. Well, the process takes a while and most of it involved formalities (like me sending them a buttload of money) and that process just completed itself last week when my membership had to be approved by the folks on the Eastern AD/UPM Council. (That's Asst. Directors and Unit Production Managers). Yay, I wasn't blackballed. And the membership is retroactive to the day I started the job.

So, guess what showed up in the mail yesterday. Yup my shiny new membership card. Bask in its glowing glory. 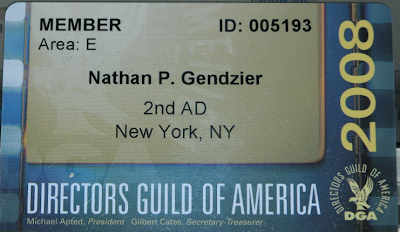 And that's not all that was in the envelope either. There was also a nice letter telling me that they wanted the rest of their buttload of money for the initiation fee and here's a handy worksheet where you can report your earnings for the 3rd and 4th quarter so we can send you a bill for your dues. Ain't Guild membership grand?

The better news on that front is that I earned enough on that movie that I'll qualify for the Health Plan which will take effect in January. I'll hold off on getting sick until then.

Also, Michael Taylor stopped in and commented on the previous post:

"The mystery of seemingly random referrals remains an ongoing conundrum. For a while there, I got a small blizzard of hits from a web site called "Modern Drunkard Magazine" -- apparently because my own blog title contains the word "juicer."

He's got a blog called Blood, Sweat, and Tedium: Confessions of a Hollywood Juicer There's a couple of things that strike me here.
1. I like having new readers and commenters. That's why I write here.
2. I've certainly heard of electricians on sets being referred to as "Juicers", but I think it's more of a West Coast thing.
3. There's a "Modern Drunkard Magazine" ? Holy shit! This I had to see.

So, off I went to have a look. I think most of you will enjoy this entry called "Drunks in Space". Give it a look.

Oh, and what am I forgetting?

Oh, and one more thing I forgot about. One of you is getting a surprise. I'm not saying who and I'm not say what. It should show up in about a week and I suspect we'll all hear about it when it gets there. Feel free to speculate.

What are the Red Sox of which you speak? Red stockings? Is this some kind of allusion to trollops?

The storied Boston Trollops on the verge of beating the Tampa Bay Rays (aka the venomous mud slugs), to advance to the World Series.

And I have no idea why that last paragraph showed up all bold and huge. I thought I'd reset the formatting. Eh, I like it anyway.

Congrats on good new and better news. And the "Modern Drunkard Magazine" was funny. It's bookmarked now.