Regardless of what it is, you need to have control over it, possibly for a number of days and every time the camera rolls, you need it to be doing what you want it to do. Another thing to add to the mix is that a.) real rain photographs like shit (something about the shape of the drops), b.) you need to backlight rain or you won't see it and c.) you need to frontlight snow or it looks black (because you'd only be looking at the dark side).

The flipside of this is --how do you deal with the unpredictability of the weather. On a TV commercial that is only a one or two day shoot, you usually just cancel and postpone the shoot. But you need to notify everyone early enough the day before or you have to pay them all anyway according to union rules. On a feature, you need to have cover sets -- some interior set that can be called up on short notice and can be dressed and lit in time. And the producers usually want to hold off as long as possible to make the decision about whether you're "going to cover". Some will make the decision by lunch time. Some will wait until the "Call Sheet" has to be ready at wrap. I've worked for one producer who would put a note on the Call Sheet instructing everyone to call the Production Office at 5:00 a.m. to find out where we'd be shooting.

On Crocodile Dundee II, our first day of shooting was the scene where Paul Hogan is fishing with dynamite from a rowboat in the East River. Day one was a bright sunny day with a clear blue sky. Problem was, that this scene was scheduled for two days. So the Call Sheet for the second day had three possible sets listed: Bright and sunny - finish the scene on the river; Cloudy - some other exterior that didn't have to match; Rain - an interior scene. If I recall, we went on like this for a week and finally went back to the river on Day five.

Needless to say, this is a pain in the ass for all involved. It's tough enough making sure you've got all of your ducks in a row for what is scheduled to shoot; being ready for two or more locations is just Teh Suck!

Iron Will, which I've talked about before had it's own unique weather problems. (An aside: At the time this job happened, I was living in L.A. but on a job in NY. The night the Producer called me about it, he forgot about the time difference and called me at 2:00 a.m. So the phone rings and wakes me up and without introduction, he says, "Hey kid. I'm making a movie in Minnesota. It'll be cold as hell and they fucking hate Jews. Wanna come?" How could I turn down an offer like that?)

Anyway, back to the subject. This movie, being about a dogsled race, was totally dependent on snow. Because of that, the Producer bought weather insurance. Buying weather insurance is extremely rare. It's very expensive and if I recall, we had a $100,000 deductible. In 1991, on that movie, that was probably equal to the cost of shutting down the production for one day. But that's the thing...you never shut down production. You do everything humanly possible to keep shooting. And the insurance could be applied to what you spent in order to keep shooting.

So, it snowed in the weeks leading up to shooting. It was cold, just like it was supposed to be. In fact on Day One of shooting, it was about 30º below zero with a few feet of snow on the ground and snowing lightly...gorgeous little diamond crystals floating in the air. And it stayed cold after that.

All went well for a couple of weeks. It stayed cold, so the snow didn't melt and we were shooting at some fairly remote locations, so the snow wasn't getting dirty before we got there. Then we had to go somewhere -- Not remote. Snow all tracked up and filthy. So the Producer asigns me to find some clean snow, have it trucked in and spread over the set. (I've mentioned before that this job would usually go to an Effects Supervisor or a Greensman, but for reasons of his own, he decided my department should do it.)

One of the Assistant Location Managers, being local, pointed out that the airport didn't use salt because of the damage it can do to planes, so they'd have mountains of clean snow. So, we called the airport and made arrangements for 10 dump trucks to come over and get loaded up with snow. Then they brought it to our set and dumped it and we had a bulldozer move it around until it was spread all over. Unfortunately, even though we had the bulldozer "pull" the snow (drive backwards so that he wasn't leaving his own treadmarks in the snow), it still looked like shit. So, the same Assistant Location Manager (thank God for locals), suggested we call MN-DOT and see if we could get one of their snowblowers. Hey, it's not like they were using it. So we sent the trucks back for another 10 loads of snow and waited for the snowblower to show up.

For those of you who don't live in the Frozen North, places like Minnesota do not fuck around when it comes to moving snow. The machine that showed up looks like your basic heavy dumptruck, but mounted on the front is a scoop that's about 8' X 8' and has a giant turbine inside. When they crank it up it can throw the contents of one dumptruck 200' or so in about 20 seconds. Yeehaw! So, after some fits and starts, we had a bunch of heavy equipment on the payroll and we had a system.

Then the mountains of snow at the airport dwindled. Let me tell you, I'm willing to bet you've never seen anything quite like the look you get from a farmer when you ring his doorbell to ask if you can take his snow away. System still working. And the producer is checking with me regularly to make sure I'm doing this as economically as possible.

Then one day, he comes to me and tells me I need to change how I'm doing things. "Spend as much as you need to". I guess the possibility of spending $90,000 when you have a $100,000 deductible and a policy that wasn't cheap to begin with was not an attractive prospect. He needn't have worried...'cause then it got warm. The day we shot the end of the race (at a big open field next to an old railroad station in Two Harbors, MN), a contingent from Disney showed up to see how we were spending their money. The tent for the extras was on low ground (who'da thunk?) and shin-deep in water. We had 20 dumptrucks making roundtrips all day and we were dumping loads of snow between takes. It was melting as fast as we could put it down. The Disney execs were so astounded that we hadn't ever shut down that they didn't give anyone a hard time about budget.

At an earlier point in the schedule, we shot a stunt on a railroad trestle. Here's a picture of us laying down the snow the night before. (Sorry, it's actually a photo of a photo, so not perfect.) You can see our big-assed snowblower doing its thing and if you look closely at the right edge of the frame, you can make out a clamshell-crane that was mounted to four railroad gondola cars full of snow. It turns out that if you drop big giant clods of snow from high enough they explode and spread out quite nicely. 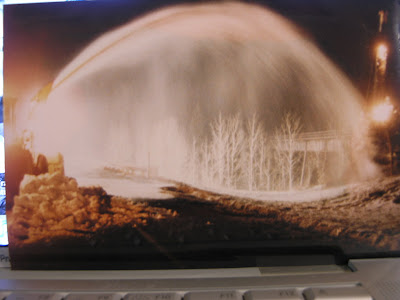 So, the next morning, the director walks up to me and says, "You know that little scene where Kevin's supposed to lean out of the train and hook up to the telegraph pole? Well, I found a perfect spot just a couple of hundred yards down the track. It's even got good snow!" To which I responded, "Of course it's got good snow. I put it there last night". When he just gave me a blank stare, I added, "Haven't you noticed there hasn't been any snow behind the camera for the last three weeks?"

That's all I've got for now. If you're new to the blog and want to read the rest of the story, it's here.
Posted by Nathan at 6:37 PM

I'm going to watch Iron Will this weekend. I think it will be interesting viewed in the new mindset. :)

Another facet of movie-making de-mystified. Great job, Nathan! I want to be in movies when I grow up, again!

When you watch the end of the race, pay attention to how lumpy and beige the snow is!

You tell the truth! My very first commercial was set in the North Country. The Gods that be on that project didn't like the dirty snow in front of the picture house, so all the PA's, art department, anybody really spent the better part of the morning shoveling the snow AWAY from the house. Then they replaced the snow with new snow from a snow machine (like the ones used to make snow at a ski resort) This experience made me realize how goofy the film process was....your next post could be on rain towers and how they can fall over if not properly weighed down. (the director got soaked, I got away in time :)

Thanks guys. I feel all shiny now. And I've probably got a "rain" post in me.

See, I'd be too tempted to look at the director and say, "Aren't you God. Can't you make it snow? I'm so disappointed." My guess would be my hat would follow me out the door.

Coool. :) I knew that you were going to use that photo-of-photo in here as soon as I saw what the real topic was.