If you were paying attention, you probably caught the hints that we were on vacation again. Yeah, we went back to the lake we were at a few weeks ago. We tried to book five nights, but we could only get four nights if we wanted a cabin on the lake. Here's the one we stayed in this time. 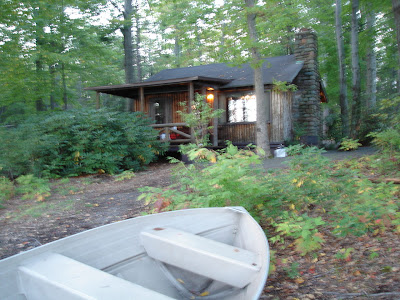 Fishing was decidedly unspectacular for most of our stay. We took the boat out a few times and other than losing bait, we never got a bite while in the boat. The only things we caught at all were from the dock. And those weren't keepers. In fact, twice, I caught fish that were tenaciously hanging on to the end of the worm...which was twice their size. Ah, the epic battles. 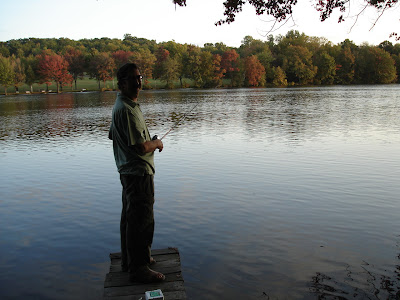 I mentioned yesterday that the fishing was bad because it was so windy and the lake was seriously roiled up. Last night, just before dark, things calmed down and I thought I'd give it one last try from the dock. Ladies and Gentlemen, I caught me my first large mouth bass...evar! And it was a good one. Lookee here. 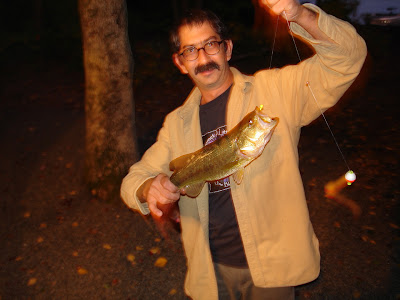 As a child, I fished from piers in the ocean, so I was used to catching pampano and other moderately sized salt-water fish. This was my first time catching anything big by lake standards. And this little bastard put up a fight. My little cheapo K-Mart pole bent in half when he took the bait, and then he jumped out of the water drawing a "Holy Shit" from me. I thought I'd lost him for a moment when he just decided to swim without fighting, but when I got him almost reeled in, he started fighting again. I'm just thankful the line didn't snap.

GF told me I shouldn't guestimate weight, 'cause some of you would know better, but I'm pretty sure this is an 85 pounder. Yup, that's my story and I'm sticking to it.

BTW, I threw him back. There were already burgers on the grill and neither of us had any interest in cleaning fish last night.
Posted by Nathan at 7:42 AM

From the obvious strain on your face from holding up the fish I can tell that you're just being modest and it must be 110 pounds at least.

Also, I thought any product sold at Kmart is of the highest quality standards, further proof of the immensity of this particular fish.

On vacation again - words that make the vacation-goer happy, and the rest of us jealous and whiny.

Except me, of course.

Glad you had a good vacation.

And I'm also glad you threw the fish back. I'm sure he's now telling all his buddies about the human he caught.

My wife once caught a largemouth with about a 3-inch shiner for bait. It tugged on the line pretty hard, but when we hauled it in, it looked like it had gotten away. Oh well, at least it left the bait untouched. Then we realized we had a 5 inch largemouth - it had swallowed the shiner whole - and the shiner was about 2/3 its body weight. Those things fight hard.

This picture is my good friend Barb with her 148 lb catch last summer.

I do have to say that I'd think that hanging around with a 150 lb flatfish would make one feel skinny and lively by comparison!

Sadly, I don't have permission to view "This picture."

Here, use this link instead.