Update on "There's No Crying in The War Room". And A Cat!

Update on the Update: I've just put up Chapters 27, 28 and 29. While revising them, I realized they really hang together and it wouldn't be good to post them one at a time. I hope you'll like them.

When I first started posting chapters of "There's No Crying in The War Room", the feedback I got was that there was way too much exposition in the first chapter. I was told that the pacing improved in Chapter Two, but I'd need to fix Chapter One to get the average reader that far.

Well, I've seen the light. Its my intention in the next week or so, to revise Chapter One. I'll be pulling a lot out of it. Since I like a lot of the things I'm cutting, I hope I can find other places in the story to drop some of the snipped snippets. If not, I'll mourn their passing, but I won't shove them in somewhere they don't belong.

As I've said before, I'm more interested in getting to the point where I'm writing new chapters (we're getting close), but I'm now resigned to the importance of getting Chapter One squared away. I wouldn't want to think that people are dropping in and then never returning because Chapter One put them off.

So anyway, those of you who tried talking sense to me, Thanks. A tiny bore-hole has opened up in my rock-hard head and the message has wormed its way to my frontal lobe.

And now for your entertainment, I present Oliver Henry (or just plain Ollie). 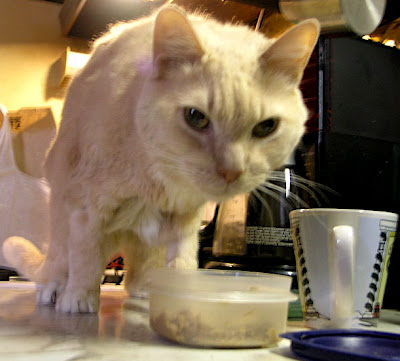 He's the one I mentioned was recently diagnosed with diabetes. Until a few days ago, we were having to force-feed him a smelly gruel. He was pretty resistant to the whole experience but apparently we were getting enough into him because on his last vet visit, he had gained some weight.

Well, a few days ago, he started doing this thing where he comes and finds us and gives us a look that says, "Yo, I've got a reservation. Is my table ready?" Now, he's eating on his own. Yay! There's a catch though. He won't eat straight from the can, it has to be from that little tupperware bowl. And he won't eat if you put the bowl on the floor. When you do that, he sniffs at it and make pawing motions as if he's prepping the litter box for a deposit. But if you pick him up and put him on the counter with the bowl, he goes to town on it.

We repeat this process 5 or 6 times a day. Its a huge improvement.
Posted by Nathan at 2:57 PM

Ollie, congrats, buddy. Nathan and GF are well on the way to being properly trained. Keep up the good work.

I can see your feline overlord is a demanding one - and I'm glad he's healthier now!

One of my dogs gets asthma medicine - 3 pills individually wrapped in cheese - mornings. The second gets back medicine, half a pill wrapped in cheese 1x a day. The third requires eye drops 1x a day, evenings, followed by a treat.

Aside from the eyedrops, the dogs are very pleased by all the cheese this brings into their lives.

I'm keeping my vet's children in private school, I think.

Yeah, cats won't do the cheese thing. Everything is force and claws and loose fur in your mouth.