In early February, I took you all on a little tour of my neighborhood to show you the contrast between most of it and one horrid new building going up. (The building is not improving as work continues.) One of the shots showed the Prison Ships Martyrs Memorial in Ft. Greene Park.

I'm fairly certain that most New Yorkers have never heard of or seen the Prison Ships Martyrs Memorial, much less the rest of my vast International audience. (OK, we're pretty much talking Pakistan and Canada, but some other countries show up accidentally on occasion.) It's actually a pretty important memorial, so I thought I'd tell you all about it.

Let's start with the park itself. In 1776, American General Nathanael Greene supervised the construction of Fort Putnam on land that's now part of Ft. Greene Park. During the Battle of Long Island, the Continental Army surrendered the fort and retreated to Manhattan.

During the Revolution, the British imprisoned, as POWs, thousands of men, women and children, many for refusing to swear allegiance to the King. In addition to American civilians and resistance fighters, the British captured the crews of foreign ships, especially Spanish vessels. When the British ran out of space to house them, they began holding prisoners on decommissioned and damaged ships anchored in the East River.

Disease was rampant; food and water were scarce or non-existent, and the living conditions were terribly overcrowded. If you had money, you could buy food from boatmen who would row out to the ships; otherwise you lived on sawdust-laden bread or watery soup.

When, as was predictable, many of the captives died from disease and starvation, their bodies were buried in shallow graves in the marshes of Wallabout Bay (a little bit north of where the Manhattan Bridge now stands) or just thrown overboard. In spite of the British surrendering at Yorktown in 1782, the prisoners were not released until the British abandoned New York City in 1783. After the war, the British Commander in charge of the Prison Ships was tried for war crimes and hanged.

In the years after the war, Brooklynites made a point of collecting bones that washed up on the shore and of retrieving many of the bodies from the marshes. They hoped to create a permanent burial site and in the early 1800's the first Martyrs Monument was built by the Tammany Society of New York on a small plot of land in Vinegar Hill, a neighborhood near what is now the Brooklyn Navy Yard.

In the meantime, Ft. Putnam which had been renamed in honor of General Greene was decommissioned and designated by the City of Brooklyn to become a city park in 1847. (Brooklyn was a separate city until 1894). Frederick Law Olmsted and Calvert Vaux designers of Central Park, were hired to design the park and to create a new crypt for the remains of the prison ship martyrs.

The remains of the prisoners were moved to the site in 1873. Twenty-Two boxes containing only a fraction of the 11,500 known to have died were interred in the new crypt. Toward the end of the 19th century, a diverse group of interests including the Federal Government, municipal and state governments, private societies and donors began a campaign for a permanent monument. In 1905, the firm of McKim, Mead and White, (Sanford White), was hired to design a new entrance to the crypt and a wide granite stairway leading to a plaza on top of the hill. From the center of the hill would rise a freestanding Doric column with a bronze lantern at its top. (The lantern was never functional.) President-elect Taft attended the monuments dedication in 1908.

This November will mark the monument's 100th year. A complete renovation is nearing completion and the Eagles which once stood guard at four corners will be returned to the site for the first time since 1970. Here are some pictures. 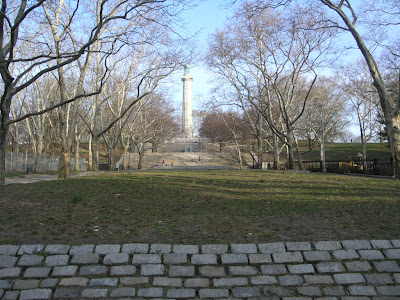 This is the monument seen from the plaza at street level. 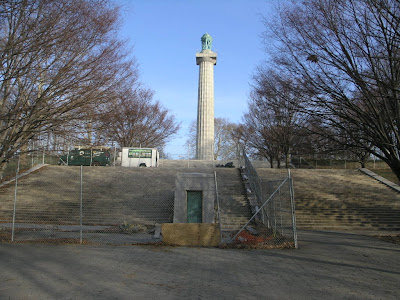 At the top of the first rise of stairs is the entrance to the crypt. 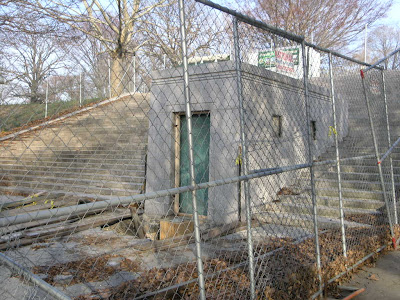 I'm sure it'll look better when the renovation is done. 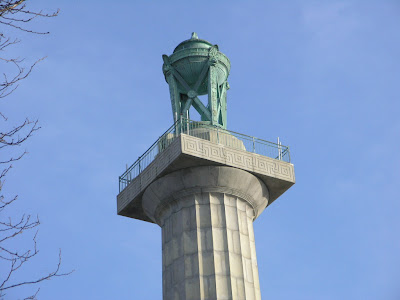 This is the urn at the top. 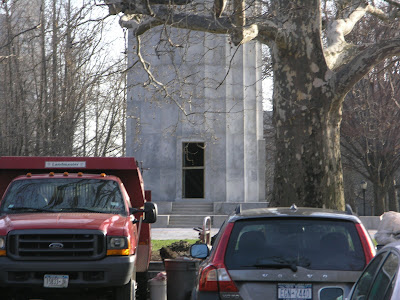 This is the entrance to the column itself. Until about 1947, there was an elevator and you could go to the top. One of these days I'll finagle a way in there. Location Scouts get into a lot of places few other people ever get into. ::grin:: 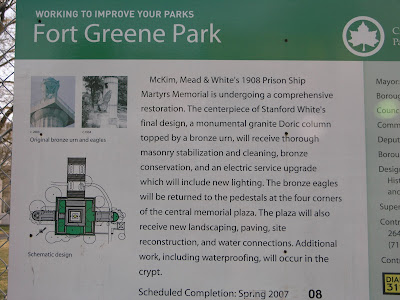 Note the "Scheduled Completion" at the bottom of this sign. 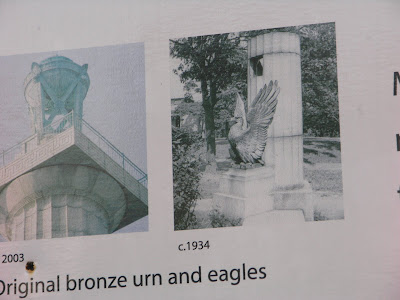 This is what the eagles will look like when they're brought back out of storage.
Posted by Nathan at 5:32 PM

One of the best books I read last year was David McCullough's 1776. My wife and I passed the book and CDs from the audiobook back and forth like obsessed people. It follows George Washington from an early success at the Seige of Boston, through aggravating defeats at Long Island, Manhattan and Harlem, to victory again at Trenton and Princeton.

One of the two true heroes of the early part of the war was Nathanael Greene (the other was his best friend Henry Knox). He's one of those guys that high school history class just didn't have time to really get to, which is a huge shame. He's quite likable as a character.

I highly recommend the audiobook, especially, as the author is an accomplished professional narrator as well as a detail-crazy packrat of a historian. You'd really like it, Nathan, as half the book takes place in Manhattan and Brooklyn Heights and environs (which were quite hazardous for our Patriots; NY was a Tory stronghold at the time).

Nathan, this is an interesting post. I'm reminded of my early days in Boston when I walked many places, and discovered a number of parks and monuments I hadn't known about. I'm fascinated by our history, and nothing brings it home like actually being where it happened. Thanks for your pictures and the descriptions.

One of the things that got me interested in this monument is that it's a monument of obvious National historic import, but it was built and is maintained by a city. I could be wrong, but I think its the only monument of its kind that doesn't fall under National Parks jurisdiction.

Cool, Nathan, thanks for the tour.

I assume you'll get us pictures of the site once it's restored?

We are David McCullough fans too, and also watching the John Adams miniseries. His work is well researched, but also wonderfully readable. My favorite was his history of the Panama Canal.

Nathan, I really enjoy the photo-essays. I've never been to NY or surrounding areas... someday we will make it there.